Ecuador is a multiethnic nation, full of biodiversity, cultural richness, natural and archaeological sites, located right on top of the equator line.The steamy jungle wilderness of the Oriente and the mist-shrouded lowland cloudforests hold and protect just some of the country’s mind-boggling array of flora and fauna: there are more bird species per square mile in Ecuador than any other South American country and more orchids than anywhere else on the planet. The country’s greatest draw, though, are the captivating Galápagos Islands, nearly 1,0000km from the mainland, whose extraordinary wildlife inspired Charles Darwin and changed the world. Quito is the country’s capital and second-largest city, right behind Guayaquil. Located in the mountainous Sierra region of Ecuador, it is a reminder of the country’s colonial past and natural beauty.

At the end of the year 2014, FENEDIF won a contest organized by the Spanish Agency of international cooperation for development (AECID), to finance a project that combines the promotion of the integration and the promotion of accessible tourism to people with disabilities and their families, which began in June of 2015. Its coverage is regional and is located in the provinces of Esmeraldas, Manabi, Imbabura and Orellana.

In addition to the funding provided by AECID, we have the support and endorsement of the National Council for the equality of disabilities (CONADIS) the Ministry of tourism (MINTUR) and 56 subsidiary FENEDIF associations. The private business sector and academia will soon join this effort.

The first accomplished activity is the preparation of a situation analysis of the four provinces, which highlights its tourist potential and conditions of employability of the disabled population that lives in the sector, with the purpose of knowing the productive vocation and the interest of its inhabitants for the generation of associative enterprises and sources of self employment to improve family incomes and boost the development of accessibility to local tourism.

Another interesting activity has been raising a database of national establishments tourist’s accommodation, meals and drinks that are accessible; investigating also tourist destinations, routes and circuits that provide facilities of access for tourists with disabilities and their families and, for adults of greater national and foreign origin.

Instituto Nacional de Audición y Lenguaje, located in Quito, the largest deaf school in Ecuador, regards LSEC as the natural language and first language of deaf people in Ecuador, while Spanish is their second. Ecuadorian Sign Language has the most regular contact with sign languages from Peru, Colombia, and the United States. (Eberle et al 2012).

While LSEC is the primary language of communication for most deaf people, widely varying degrees of bilingualism (spoken and written) in Spanish are common. Spanish literacy for access to mainstream society and employment is valued. All domains. All ages.

Medical care is usually available in major cities, but may be quite difficult to find in rural areas. Pharmacies in Ecuador are known as farmacias. It can be challenging to find imported pharmaceutical items; bring essential health and hygiene supplies since these generally cost more in Ecuador. It’s generally advisable not to drink tap water anywhere in Ecuador. Bottled water is widely available, and some hotels and guesthouses catering to foreigners provide purified water (agua purificada) for guests wishing to fill their own bottles. The tap water is generally not safe to drink in Ecuador. Don’t forget to use bottled water when brushing your teeth as well! Ice is not always made with boiled/ bottled water. Order your beverages without ice (“sin hielo”) or ask your tour leader if the ice is safe in a particular restaurant. Most Galapagos yachts will include bottled water in your room. Ice used on board these yachts is generally made with purified water as well.

The law states that all tourists entering Ecuador are required to have travel insurance that covers them in Ecuador for the duration of their stay.

Most tourists have a good experience when arriving in Ecuador.

All nationals entering as tourists need a passport that is valid for at least six months after arrival. You are legally required to have your passport on you at all times. Many people carry only a copy when they’re hanging around a town, though this is not an officially acceptable form of ID.

Visitors from most countries don’t need visas for stays of less than 90 days. Residents from a handful of African and Asian countries.

The climate of Ecuador varies by region, due to differences in elevation and, to a degree, in proximity to the equator. 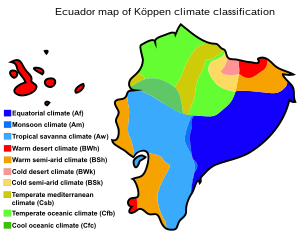 The coastal lowlands in the western part of Ecuador are typically warm with temperatures in the region of 25°C (77°F). Coastal areas are affected by ocean currents and between January and April are hot and rainy.

The weather in Quito is consistent with that of a subtropical highland climate. The city has barely any cool air since it is close to the equator. The average temperature during the day is 70 °F (21 °C), which generally falls to an average of 50 °F (10 °C) at night. The average temperature annually is 64 °F (17.8 °C). There are only really two seasons in the city: dry and wet. The dry season (winter) runs from June to September and the wet season (summer) is from October to May. As most of Ecuador is in the southern hemisphere, June to September is considered to be winter, and winter is generally the dry season in warm climates. Spring, summer, and fall are generally the “wet seasons” while winter is the dry (with the exception of the first month of fall being dry).

Spanish is the official language of Ecuador. In addition to Spanish, the Indian population of Ecuador  speaks Quichua and ten other native languages are spoken throughout the country.


Ecuador uses 110 volt, 60 cycle electricity, same as the US. Plugs are typically the two prongs flat type so US travelers will not typically need a converter or adapter.